The payments for the Peterborough SIB are based on the frequency measure. Please note that the interim results are not calculated in precisely the same way as the payments for the SIB will be made. [update: the results from the first cohort of the Peterborough SIB were released in August 2014 showing a reduction in offending of 8.4% compared to the matched national comparison group.]

In the period the Peterborough SIB delivered services to the first cohort (9 Sept 2010-1July 2012), the proportion of crimes committed over the six months following each prisoner’s release reduced by 6.9% and the proportion of criminals by 5.8%. In the same period, there was a national increase in continuing criminals of 5.4%, but an even larger increase of 14.5% in the number of crimes they commit. The current burning issue is not that there are more reoffenders, it is that those who reoffend are reoffending more frequently. 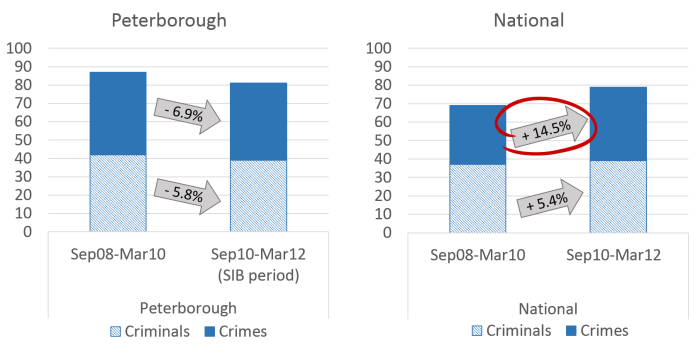 Criminals (binary measure) in this instance are defined as the “Proportion of offenders who commit one or more proven reoffences”. A proven reoffence means “proven by conviction at court or a caution either in those 12 months or in a further 6 months”, rather than simply being arrested or charged.

Crime (frequency measure) in this instance is defined as “Any re-conviction event (sentencing occasion) relating to offences committed in the 12 months following release from prison, and resulting in conviction at court either in those 12 months or in a further 6 months (Note: excludes cautions).”

The two measures are related – you would generally expect more criminals to commit more crimes. But the way reoffending results are measured creates incentives for service providers. If our purpose is to reduce crime and really help those who impose the greatest costs on our society and justice system, we would choose a frequency measure of the number of crimes. If our purpose is to help those who might commit one or two more crimes to abstain from committing any at all, then we would choose a binary measure. Source of data: NSW Bureau of Crime Statistics and Research

The effect of the binary measure in practice: Doncaster Prison

A Payment by Results (PbR) pilot was launched in October 2011 at Doncaster Prison to test the impact of a PbR model on reducing reconvictions. The pilot is being delivered by Serco and Catch22 (‘the Alliance’). The impact of the pilot is being assessed using a binary outcome measure, which is the proportion of prison leavers who are convicted of one or more offences in the 12 months following their release. The Alliance chose to withdraw community support for offenders who are reconvicted within the 12 month period post-release as they feel that this does not represent the best use of their resources. Some delivery staff reported frustration that support is withdrawn, undermining the interventions previously undertaken. (Ministry of Justice, Process Evaluation of the HMP Doncaster Payment by Results Pilot: Phase 2 findings.)

I have heard politicians and policy makers argue that the public are more interested in reducing or ‘fixing’ criminals than helping them offend less, and thus the success of our programmes needs to be based on a binary measure. I don’t think it’s that hard to make a case for reducing crime. People can relate to a reduction in aggravated burglaries. Let’s get intentional with the measures we use.

Community Insight Australia a social enterprise that maps Australian data so you can understand the communities you live and work in.

Delivering the Promise of Social Outcomes: The Role of the Performance Analyst, stories of people who manage services to achieve outcomes and descriptions of how they do it.